A personal and powerful portrait of singer Bethan Richards as she attempts to come to terms with living her life with a severe visual impairment. Her brother, the director Dylan Richards, helps her tell her story before she loses her sight completely.

From the director/producer Dylan Wyn Richards…

Bethan Richards is almost completely blind, she is also my sister.

As far back as I can remember, she has suffered from terrible eyesight. Ever since childhood, she has attempted to conceal it from the world and I have never really, truly understood to what extent she has suffered, both physically and emotionally.

Bethan was born with severe glaucoma, as a result of several operations, including three attempted cornea transplants, the most she can now see are shapes and colours. She is also in constant pain. Her sight is deteriorating to such a degree that she will soon have to face the terrible inevitability of losing her sight completely.

Agoriad Llygad follows Bethan’s hopes and fears as she prepares for a world without vision. She will need to learn to rely on a guide cane and her guide dog Betsi in order to do the everyday things most of us take for granted. But as a working mother of two young children, life has to carry on, however challenging.

This is a seminal period in her life, and I will be there to capture it. 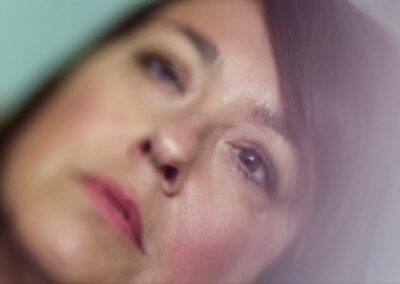